How Does Speedfan Work?

SpeedFan is a freeware system monitoring program for Microsoft Windows which controls the fan speed, voltage, and temperature. SpeedFan is an incredible software if you’re building your own computer. It will present all the factors as a chart along with an indicator in the system tray.

It can also automate your computer’s cooling cycles using multiple sensors in the CPU, motherboard, as well as HDDs. Other vitals include voltages and fan speeds can also be done. If you want to get all the access to your personal computers’ internal components, then SpeedFan is the only solution. With this, you can simply monitor the internal functioning and control the fan speed.

SpeedFan is one of the hardware monitor software which is mostly used for Microsoft Windows. This system uses Hardware monitoring chips which can be found on every motherboard. The main task of this program is to monitor your computer hardware.

With this system, you can monitor your CPUs’ fan speed, the Hard Disk and CPU temperature, and most of the typical things of your computer. However, though SpeedFan offers the best service, most don’t understand how to use speedfan on their Windows because of the complexity.

How Does SpeedFan Work?

SpeedFan is a system checker which is easily accessible to digital temperature sensors. It can access the S.M.A.R.T. info of your computer and then demonstrate the hard disk temperature.

The benefit of using this SpeedFan software is that you can change the fan speeds through this. But this will be based on the capacity of the sensor chip as well as the hardware. Fan speed will change according to the temperature of your computer inside.

SpeedFan can efficiently work with several Windows like Windows 7,8, 10, Windows 64 bit, Vista, XP, and many more. SpeedFan also supports SCSI disks, which support your P.C. to connect with peripheral hardware, for example-disk, drives, tape drives, and so many things.

It can control and monitor the temperature of the computer components from several sources. This monitoring system can enter digital temperature sensors and change the speed. While adjusting the parameters for the fan speed, make sure you set them with your hand. Thus this can reduce the noise of the fan.

If you don’t notice any noise in the exact fan, set the speed as the minimum for this one. For a conscious, you can use the level of 100 as the maximum. Otherwise, the fan will create noise, but at this point, you can reduce the speed to 90 to 95.

When the temperature is increasing, the application will automatically multiply the fan speed to 100. It does not matter what maximum speed you have chosen for the fan. Finally, a word on the USE FAN x List box.

My computer’s temperature changes more than one degree when a fan operates faster. You can specify which fan each temperature should use. FAN1 influences both TEMP1 and TEMP3 in my system.

How To Change Fan Speed On Windows? 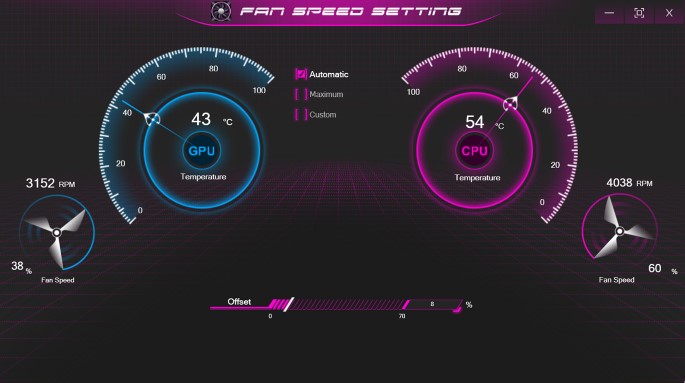 To access BIOS, most systems utilize the function keys such as F2 or F3 or F10, or Del. After entering BIOS, you will find a menu for configuring the fan speed. However, modifying the BIOS setup is dangerous. So, before making any changes, read the documentation thoroughly.

You can also increase or decrease the CPU Fan speed from the Advanced Power Option of your Windows Operating system. This advanced Power System has one of the System Cooling Policy, which is a subsection of it. From this system, you can activate this option, which will accelerate the CPU Cooler fan.

You’re tampering with your computer’s cooling system, and if you’re not careful, your hardware might be damaged. Furthermore, remember that SpeedFan does not support all computers, so not all will be able to use it to manage this. However, it is quite beneficial when it works.

Not all the motherboards work well with the SpeedFan program. To operate SpeedFan, the ACPI Suspend mode S1 option must be selected in the BIOS. Also, make sure the SpeedFan application is up-to-date. Then look for your motherboard chip in configuration. If your chipset is configured, it will display fan speed for optimal settings. If your hardware isn’t listed in the dropdown, SpeedFan won’t be able to display fan speed.

SpeedFan works most effectively to protect the components of your personal computers. The chips which are used for hardware monitoring run at a time and cause the temperature to rise.

The SpeedFan can cool this down immediately by changing the fan speed. The main function of your hard disk is to store and retrieve data. When you run your computer, the hard disk temperature will increase gradually.

Then the automated SpeedFan controls the temperature to cool it down. This system can control your computer’s fan speed through the sensor chip and hardware. It’ll allow the fans to reduce noise as well as power consumption.

How Does Speedfan Work?

Setup CP Plus DVR Live View from Mobile and Computer