Transfer Files from One Computer to Another with AOMEI Backupper 5.3

AOMEI Backupper Standard is a service provider backup software. AOMEI Backupper feature “File Sync” can help you transfer your data from one computer to another easily. AOMEI File Sync can not only synchronize a folder to a local disk or removable device, but also to other computers within LAN, and NAS. It is good for sharing files with others. AOMEI Backupper is also a professional and safe backup and restores third-party tools. It can sync most kinds of files but not limit to files in a few easy steps. With it, you can never worry about the security of your crucial data.

AOMEI Backupper is very similar to Windows built-in backup and restore tool that can help you to backup when USB plugin, event-trigger backup, or migrate Windows 10 to new hard drive easily and quickly. If you want to protect or clone unlimited computers within your company, AOMEI Backupper Technician is a great choice. Using the built-in AOMEI image deployment tool, you can also deploy/restore system image files on server-side computers to multiple client machines over the network.

How to transfer files from one computer to another one with AOMEI Backupper?

Step2. Click Add Folder to select the files/folders which you would like to transfer to. Then, select a destination path. Typically, we share it on the NAS over the network so that we can use another computer to open the same file. 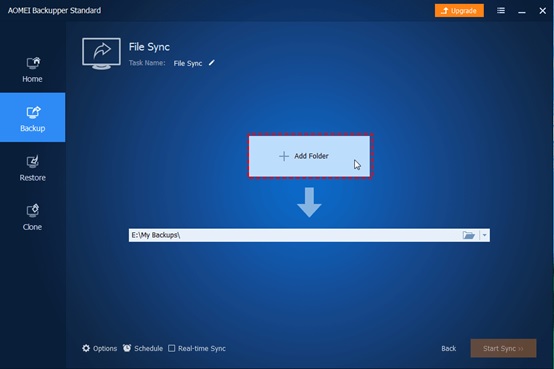 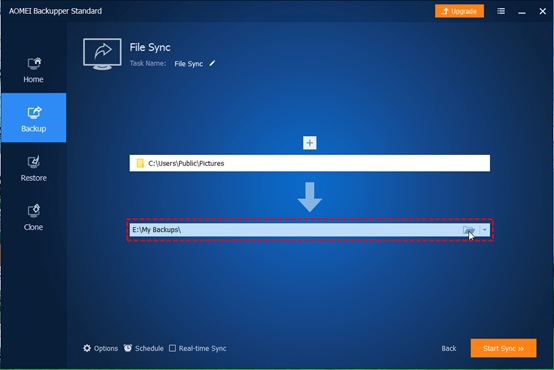 Step3. After all the settings, click Start Sync to launch the progress. When the progress reaches 100%, click Finish to exit. 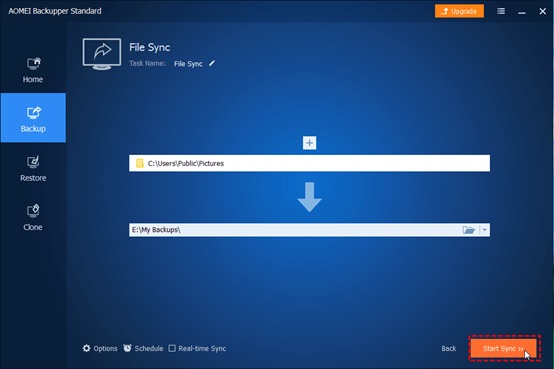 Data can be lost in various ways, such as the data can be lost through a system failure, mishandling of files, or incorrectly operated by the user. However, regardless of all the reasons, a loss is still a loss. Instead of recovering the broken data back, it’s much better to make a backup of all the important data in advance. You can restore all the data and Windows operating system to the original state while the disaster comes. AOMEI Backupper is a Free backup software that offers the easiest data backup and disaster recovery solution. AOMEI Backupper can help you set the custom sync task. You can choose to sync the files daily/weekly/monthly. Or the Real-time Sync feature can help you automatically sync changed (added, modified or removed) files & folders to the target device without delay.

The software also provides command-line cloning, that is, from the command prompt to clone the hard drive to complete unattended tasks, very suitable for advanced customers. For administrators of companies, the Server edition is capable of OS migration to a new drive on Windows Server operating systems. This is a comprehensive software that you can rely on for OS cloning.Its purpose is to make operating system transfer and computer operation easier and more acceptable to ordinary users. Download it today！